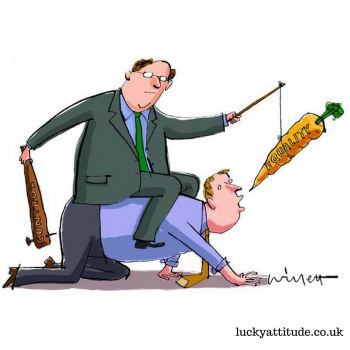 You don’t want people working for you who are just there for the money, do you?

Zappos (online shoe retailer) does an amazing job at filtering these types of people during their hiring process. New hires at Zappos go through a week of training, then they are made an offer: if they feel Zappos isn’t for them, the company pays them $2000 – no hard feelings.

Zappos is using this technique to weed out those who aren’t self-­directed/ intrinsically motivated. The people who remain, receive decent pay and self­-directed employees are given autonomy from that point on-wards.

I’ve always been uncomfortable with the traditional ideal of the “professional” employee—collected, methodical, emotionless, no fuss kind of employee, that is every manager’s dream.

I am a self­-directed person, who works best in my own flow – ­the deep sense of engagement, which is what intrinsic (from within) motivation calls for.

According to the author Dan Pink’s research

enjoyment­ based intrinsic motivation, namely how creative person feels when working on the project, is the strongest and most pervasive motivator and that paying creative people bonuses for good performance not only demotivate them, but almost guarantees they will fail.

In 1949 psychologist Harry Harlow offered a novel theory ­ what amounted to a third drive: “The performance of the task,” he said, “provided intrinsic reward.” The monkeys solved the puzzles simply because they found it gratifying to solve puzzles. They enjoyed it. The joy of the task was its own reward.

The experimenters placed the puzzles in the monkeys’ cages to observe how they reacted. But almost immediately, something strange happened. Unbidden by any outside urging, the monkeys began playing with the puzzles with focus, determination, and what looked like enjoyment.

Now, this was a bit odd.

Nobody had taught the monkeys how to remove the pin, slide the hook, and open the cover. Nobody had rewarded them with food, affection, or even quiet applause when they succeeded. And that ran counter to the accepted notions of how primates— human beings— behave. 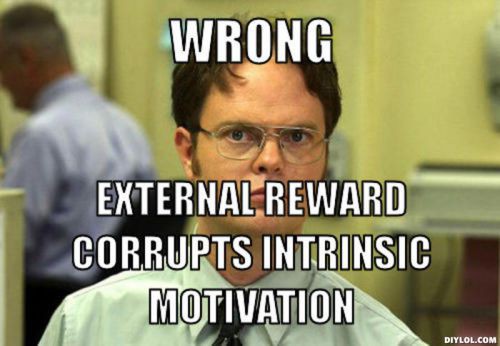 The two researchers watched a classroom of pre-­schoolers for several days. They decided to experiment to test the effect of rewards an activity these children clearly enjoyed – free playing and drawing.

It was crucial that they already liked drawing because Lepper and Greene wanted to see what effect rewards would have when children were already fond of the activity.

Children were divided into awards and no-­awards team. Children in the first group, the one who expected the award – showed much less interest and spent much less time drawing. Award had managed to turn the play into work and ruin everything.

So, those who had previously liked drawing were less motivated once they expected to be rewarded for the activity.

In fact, the expected reward reduced the amount of spontaneous drawing the children did by half.

Not only this, but judges rated the pictures drawn by the children expecting a reward as less aesthetically pleasing.

Rewards narrow our focus and that causes systematic problems for the organisations. Rewards turn play into work.

Three real reasons that motivate us to work hard every day

explains that there are, in fact, just three very simple things that drive nearly each and everyone of us to work hard:

I would add the fourth one that I think is very important:

• Fairness: Knowing that you’re being paid a reasonable amount for your work, so that money no longer becomes an issue.

Yes, for some people work remains routine, unchallenged, and directed by others. But for surprisingly large number of people, jobs have become more complex, more interesting and more self­-directed. And that type of work presents a direct challenge to managing people extrinsically.

Researchers at Harvard Business School have found that external rewards and punishments can work nicely for algorithmic tasks. But they are devastating for heuristic ones.

As organisations flatten, companies need people who are self­-motivated. That forces many organisations to become like Wikipedia. Nobody “manages” Wikipedians. Nobody sits around trying to figure out how to “motivate” them. That’s why Wikipedia works.

Human-beings have inherent tendency to seek out novelty and challenges to extend and exercise their capacities to explore and to learn. And for many, participation in these open source movement projects (like Wikipedia) can burnish their reputation and sharpen their skill, which can enhance their earning power.

There’s a new form of capitalism emerging. More customers, employees and shareholders want their business to have a bigger purpose. Generation Y believe that the primary purpose of business is to improve the world around us and that companies can do good while doing well.

Perhaps it’s time to toss the very word “management” into linguistic ash heap. This era doesn’t call for better management. It calls for a renaissance of self-­direction. Human motivation is powered by third drive – our innate need to direct our own lives, to learn and create new things and to do better by ourselves and our world. 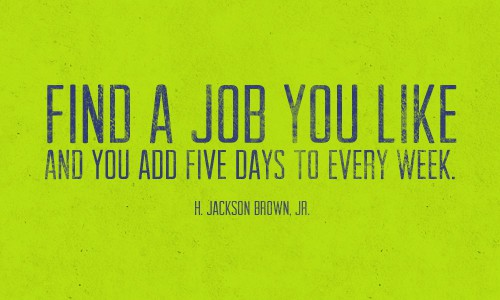 PS! Rewards aren’t demotivating if they are unexpected and offered only after the task is complete. Offering it at the beginning will inevitably focus people’s attention on obtaining the reward, rather than attacking the problem.

When people use rewards to motivate, that’s when they are most demotivating.