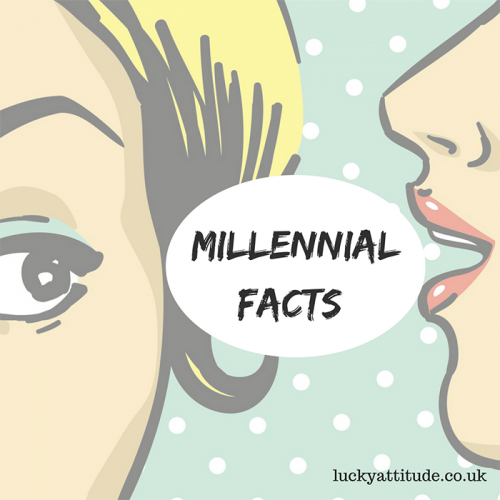 1. Millennials are making up a quarter of the UK population – there were around 16.8 million 18-36 years old in the UK.

“Today’s 30-year-olds are only half as likely to own their own home as their baby boomer parents. They are four times as likely to rent privately than two generations ago, a sector which has the worst record for housing quality, the report claims.”

“It’s now cool to be knowledgable. What was once classed as “boring subjects” are newly being shared and followed on social media by millions all over the world. “I Fucking Love Science” has over 20 million likes on Facebook, while NASA boasts 7.3 million followers on Instagram.

National Geographic has a whopping 38.8 million followers on Instagram, putting them in the same rankings as Beyonce and Justin Bieber.”

One of the largest generations in western history has moved into its prime spending years (in 2015 the oldest millennials are 35 years old).

Millennials’ unique life experiences will reshape the economy; the ways we buy and sell, forcing companies to examine how they do business for decades to come.

Being the most talked about generation in history, there is a myriad of research conducted on Millennials in the US and the UK.

This page will collate the most important Millennial facts in the UK and US.

“It’s clear that instant delivery is the expected standard.”

“74% agree that online activism is as important as traditional activism and that it makes the same amount of impact if not more. Only 4% take part in protests on the street.”

7. 59% of the UK Millennials feel traditional values are important to them. [Youth Trends Report 2016]

“A huge 98% of our respondents feel marriage once again has a place in today’s society. Young people actively want to own a house, get a mortgage, and save money and are proud to say so, too. As we found from the survey, standard values still ring true with 16-24s. getting married (57%) having children (58%) and homeownership (54%), while taking the traditional route of going to school, college and university (71%) are the most important milestones of today.”

“The new youth consumer prefers old-school approaches to life especially when it comes to ways to fall in love, despite being so connected and having access to digital concepts that immediately find a date or even ‘the one’.”

9. 49% of 18-24-year-olds defined themselves as something other than totally heterosexual [YouGov Survey]

“Young people don’t identify themselves through gender. They have more extensive view on gender than any generation before them.”

10. 78% find it easier to express emotions through emojis rather than written words [Youth Trends Report 2016]

“Youth sector wants to look up to inspiring, but relatable individuals.”

13. Being healthy and enjoying your work is the new rich [Inkling 2015]

“Being physically and mentally healthy topped the list (77%) for UK Millennials when asked what would most help them live a happier, more fulfilled life. Enjoying their work and profession ranked higher than having friends and an active social circle. Having a family ranked higher (46%), as did being wealthy (41%), in comparison.”

14. 60% of UK Millennials will engage with online content that interests them, even if it’s obvious that it’s been paid for by a brand [Inkling 2015]

“The barrier to reaching this audience is often the ‘what’ of your messaging itself, not the ‘who’s selling me something’ and ‘why should I care’ questions, which are also potential stumbling blocks.”

“Millennials are much more skeptical of celebrity endorsements, being twice more likely to turn to their colleagues for recommendations (14%) versus celebrities (7%).”

16. Over half (53%) of UK Millennials would rather spend money on an experience versus a possession (only 22.6% who valued material goods more than experiences) [Inkling 2015]

“While as a demographic they may adopt earlier, a significant 72% say they only adopt once they have seen their friends benefiting or if they have seen an obvious benefit. Only 14% of young people consider themselves to be early adopters. This suggests that word-of-mouth and advocacy will be the main determinate of youth uptake.”

“Young people’s values are changing. Whereas Boomers and Gen Xers had booze, sex, and truancy firmly at the top of their to-do list, a new wave of 16-24s are leaning towards a cleaner, brighter and less risqué lifestyle.

“Another factor that’s increasingly important to this rather well-behaved group is developing new life skills, with 67% of young people stating as so. Connecting with new cultures is at the top of their bucket list, with 88% claiming they’d like to travel more and 59% wanting to learn a new language.”

Everyday tasks such as cooking (45%) and understanding money (38%) are also high-ranking as they can use these as a kickstart to build a better future for themselves.

“They’re also geared towards understanding themselves better as humans – self-confidence is the number one life skill they’re eager to learn with 63% wanting to prioritize it over other attributes such as new ways to keep fit and even that all-important C.V. writing. Stepping up the work ladder is also pretty major with 44% wanting to learn how to gain new connections and be a networking guru.”

“A generation of laptop-living natives still turn to television first for political news (64%), although a sizeable 56% keeps track online. More use newspapers to stay ahead (33%) than use Twitter (22%) or Facebook (21%). While social media may be used to some extent to keep up-to-date, the notion of following politicians directly through Twitter or similar has no appeal for 65%.”

21. 72% 18-34 years old have suffered personally as a result of the recession [Initiative Debunking The Millennial Myth 2014]

“Short, concise, and visual is where the focus should be when it comes to online content. 71% of 16-24 year old said videos were the type of content they enjoyed the most, closely followed by Buzzfeed-esque lists (40%) and memes (32%) (Voxburner 2015). Thinking outside the box is also important. If you don’t do your homework, keeping up with young, influential content creators who are surpassing innovation in this sector will prove difficult.”

“Millennials want brands do more to address today’s societal and ecological issues. They are aware of how much power they have as customers, and expect brands to value their concerns and treat them with respect.”

“Millennials like to be involved in a brand’s creative process. To promote engagement and build loyalty is by offering Millennials the opportunity to co-create your products with you. 42% of Millennials said they are interested and want to get involved in helping businesses build their future products and services. By including them in your development process, you are gaining their loyalty and building your community of advocates and fans.”

“Content needs to be hyper-connected and accessible when and where the reader wants it to be. It also needs to be interactive via (not only) social media allowing young people’s opinions to directly influence new ideas.”

“65% of Millennials favour public or self-powered transport for their day-to-day travel, compared to just 22% who regularly drive or ride their own vehicle.”

32. The weekly food bill for UK Millennials came up to £63.65, in comparison to £57.30 for older (and wealthier) cohorts [The BBC Good Food’s National Survey]

2. Millennials are highly influenced by their peers [Mr Youth – Class of 2015 Report]

66% of Gen Y would check out stores that their friends had checked into.

3. 71% said that they had liked a brand on Facebook in order to take advantage of an offer [Mr Youth – Class of 2015 Report]

“Millennials have been putting off significant milestones like marriage and children. But that doesn’t mean they want to stay single forever.”

6. Millennials are turning to brands that can offer maximum convenience at the lowest cost [Goldman Sachs]

57% of Millennials compare prices in-store. Millennials’ affinity for technology is reshaping the retail space. With product information, reviews, and price comparisons at their fingertips.

7. 57% consider wellness the most important pursuit in life [Goldman Sachs]

Similarly to U.K. Millennials, for U.S. Millennials, wellness is a daily, active pursuit. They’re exercising more, eating smarter, and smoking less than previous generations. They’re using apps to track training data, and online information to find the healthiest foods. And this is one space where they’re willing to spend money on compelling brands.

8. Millennials are more likely than previous generations to report that they consider creativity to be a very important job feature [White House – Government]

Perhaps this is no surprise for a highly-connected generation for whom technology was a key part of their upbringing. On the other hand, they are less likely to report that having an interesting job, or one where they can see results or have advancement opportunities, is very important. 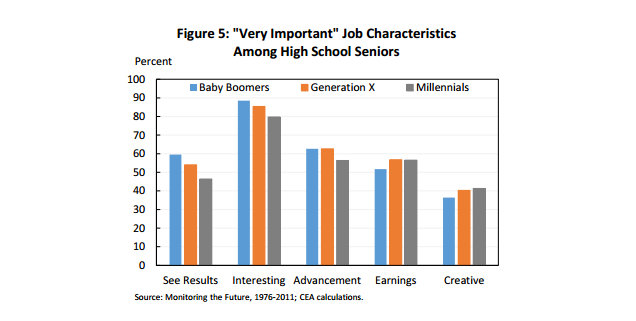 9. While many Millennials report that earnings are very important to them in a job, breaking the data down by gender reveals that this change is driven primarily by young women [White House – Government]

Each cohort of young women is more likely than the last to name earnings as a key job feature. earnings has been stable for men. The result is that Millennial women have aspirations that are similar to their male peers.

10. Millennial women are attending college and attaining degrees in greater numbers than in the past [White House – Government]

Millennial women have more labor market equality than previous generations. Millennials are not only the most highly educated U.S. generation to date, but a larger share of that increase has come from the educational attainment of women.

“In fact, starting in the late 1990s, just as the first Millennial cohorts were completing high school, women began to outpace men in completion of both four-year college degrees and post-college educational attainment.”

Six-in-ten (63%) Millennials say the use of marijuana should be made legal, while 35% say it should be illegal, according to our February 2014 survey. That level of support is higher than among Republican Generation Xers (47%) and Baby Boomers (38%), and much higher than among GOP members of the Silent generation (17%).

12. 61% of Millennials are worried about the state of the world and feel personally responsible to make a difference [Huffington Post]

13. Only 29% of Millennial workers think work meetings to decide on a course of action are very efficient, compared to 45% of Boomers[Iconoculture 2011]

80% of Gen Y said they prefer on-the-spot recognition over formal reviews, and feel that this is imperative for their growth and understanding of a job.

15. 69% believe office attendance is unnecessary on a regular basis [Cisco]