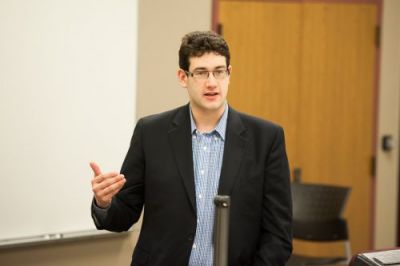 David Burstein is an inspiration to many. He is, well…everything he wants to be. A writer, activist, speaker, film maker and passionate believer in the Millennial generation.

The masher/slasher/hustler we all want to be. A person whose multiple hobbies are also his jobs.

At just 24 years of age, David has a book, a TEDx talk and crazy amounts of press, and a long bio filled with awards and recognition.

I got David on Skype to find out more about his experiences as a Millennial.

Listen to our Skype conversation here:

David has always been different, the rebellious kind. If he wasn’t satisfied with something, he knew he had to change it himself. Nobody is there to change the life of young people except the young people themselves.

Your journey started at the age of 16 when, as an ordinary high school student watching the election results come in on election night 2004 became frustrated that more young people hadn’t turned out to vote. You turned that frustration into action. Without any experience making films, and without having to pass any test or be accepted into any circles, at age 16, you set out for Washington to make a film about the youth vote and its importance in the 2008 election. The film was called 18 in ’08, which then lead into the largest national nonpartisan youth engagement organization Generation18.

This is very typical to this generation to say “I don’t have all the answers, but I try to make this happen”. There is definitely a fearlessness and resilience, that defines this generation, and it is very powerful.

From my own experience I got really frustruated and angry watching the elections and that gave me motivation to do something about it, so I went out and made this film, which was an incredible experience and thought me a lot.

What are the main things you learned from this experience?

Gatekeepers have been removed. The people, who used to control the access to media or government – that’s all gone. You can make a film without having contacts in Hollywood, you can get things distributed. We don’t have to ask for permission.

It’s really about the rise of extraordinary ordinary, which means ordinary people, who feel frustruated and want change, can become extraordinary if they make the first step. We can go in and things can rise on their merit.

How did you engage with Millennials? How did you get young people to follow your vision to become more politically active, when that vision didn’t match with their own?

The film was the first step. You can’t tell to young people “Hey, go and read that brochure or attend that lecture”. Visual medium is what resonates with Millennials.

We did thousands of screening all over the country and everywhere we went, we left a copy of film, so somebody would then spread that to their peers.

The power of visual media is very spreadable and there’s really nothing like it.

In politics, people have looked at engagement from very conservative angle: “No, they have to get all the right information, we have to control the message”. Those days are over. You need to let people talk freely, because this is what resonates with real people.

How did you get a Hollywood actress Olivia Wilde into your campaign?

She is certainly a member of this generation and sees the identity shift herself. We can see it across the board – people working from different fields (actors, musicians, politicians) are trying to see their roles more meaningful and be a part of something bigger than what they are known for.

I stumbled upon a Millennial identity article, which is about future of work. It says that on the June 30th the right to request flexible working hours will be extended to all employees in the UK, which means you’re allowed to work from home, flexitime, job charing and shift working. They are also speculating that in the future people may be allowed to work less hours during the week but longer years, for example until the age of 70. What is the future of work for Millennial generation?

Well, this is one of the biggest area that people of this generation are going to be affecting. We are looking at work as something totally different than older generation. There is no one job for life any more. An average Millennial will have 12 jobs by the time they turn 38.

When people worked at one company for the whole life, they separated their work from their life. Now people’s life and work are deeply affected by their identity, which is one.

Millennials want to make a social impact, they want to see the outcome of their work and they would rather get paid less and do what they love than other way around. This is ultimately going to shift how companies and government work. We’re now seeing these big companies working towards social transability partly because consumers want it, but also because employees demand it. People dont’ want to work for widget factory, that are just making widgets.

This generation has been pushed the institutions to start behaving in a different way.

What are the three main things that describe Millennials the best?

1. Pragmatic idealist.
For a long time these two were seen as opposite. Now people are saying we want to change the world and we know it’s not going to be easy, but we going to have a plan to get there.

3. Inclusiveness and tolerance.
We accepting the differences in people and culture. We want everybody to have the same rights. We want equality.

Key take-aways and rules to live by:

• There are no gatekeepers any more. You don’t have to ask permission to do the things you want to do !

• Life is an experiment! Ask yourself: What will happen if I ask? People (even those in power) are more open than you think !

• We live in the world where ordinary people become extraordinary. You can start small, and things will raise on it’s merit !

• Choose the right medium for Millennial engagement. No flyers or lectures, show them a video or a film !

• For Millennials work and life has merged into one. It is deeply affected by their identity !

• This generation has been pushed the institutions to start behaving in a different way (social awareness, fair trade etc) !

• Millennials aren’t scared of making mistakes, they know, that they don’t have all the answers, but they are wise enough to know the importance of starting and having a plan !

David is a grandiose guy, not only because of his achievements and drive, but even more because of his unique ability to mobilize and to inspire; to bring people together around a common cause and to create movements. That sort of thing is rare – no matter what generation you claim as your own.