To All The Haters: Ice Bucket Challenge Is Actually Genius! 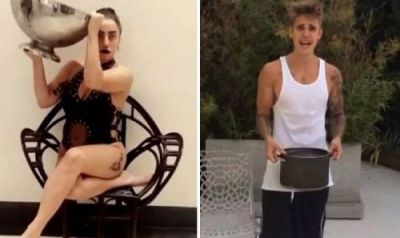 A number of criticisms have arisen relating to the Ice Bucket Challenge, accusing it of being self-congratulatory, fun and wasteful as a substitute for more genuine involvement in charitable activities.

OK, maybe celebrities could have taken a second out from all the hilarity to state what the whole thing was about, but with wasting the water – that’s an element of fund raising, like making team T-shirts or printing thousands of flyers. Every campaign makes environmental sacrifices of some kind.

I’m not saying the Ice Bucket Challenge is perfect, but I can’t think of any charitable campaigns that have dominated our social media feeds for more than a month and received $41.8 million in donations in just one month.

All the haters who want people to donate money without dumping an ice-cold water over their heads and without sharing it on social media, do not understand the fundamental reality of human race – we are social animals!

We search for community and fulfill the urge to belong, so donating without dumping buckets of water on our heads disconnects us from a cause. It’s about being a part of something.

The ice bucket challenge plays on many of the personality traits especially within a social space. The challenge understands the growing tendency of narcissism. People appreciate an excuse to post images and videos of themselves.

The challenge works perfectly with the guilt factor. Even if you think it’s a stupid campaign it’s hard to ignore a personal (and public) nomination from a friend in the name of charity.

And of course, a low barrier to entry. Rather than sponsoring someone to run a marathon, the low barrier to entry means everyone can get involved and feel as though they’ve done something useful, without training for months, buying an extra equipment or spending lots of time doing it.

Has it ever occurred to you that the sensation you get from throwing an ice-cold water over your head, is similar to what ALS sufferers are going through. You run out of breath, your body gets sore, sluggish and weak.

According to Wikipedia the origins of the idea of dumping cold water on one’s head are unclear, but whoever came up with this idea for ALS, was spot on.

The Challenge gives people a way to relate and to sympathize with the sufferers by volunteering to undertake (if only for a few seconds) the uncomfortable and breathless sensation of ice cold water. It is almost a way to jolt people awake and to make them aware of diseases which exist and need our attention.

Amyotrophic Lateral Sclerosis (ALS), which in the UK is called Motor Neurone Disease. A motor neuron is a nerve cell that makes voluntary muscle movements. MND is a disease in which these cells stop working properly.

MND affects a person’s ability to move voluntarily. It stops people eating, walking and talking, for example, but doesn’t stop them from thinking or feeling, effectively leaving sufferers ‘locked in’ to their bodies. There is no known cure at the moment.

Prior to the challenge, public awareness of the disease was relatively limited.

ALS Association reported that within a month they’ve received $41.8 million in donations compared with only $2.1 million in the same span of time as last year. More than 739,000 new donors have given money to the association.

If this is not a great achievement, I don’t know what is!

Please carry on dumping buckets of iced water over your heads and I’ll keep “liking” it.

For those wishing to donate in the UK, just go to MND Association and do it online.