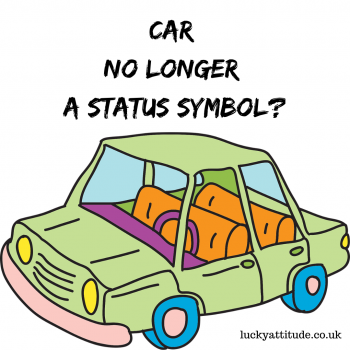 Are young people falling out of love with cars?

No, says a recent global survey.

Millennials still love the idea of owning a car, they just can’t afford it.

And they would rather frame that reality as a choice rather than a circumstance.

Being poor is embarrassing. Nobody wants to confess they are poor. We much rather rationalise our lifestyle choices by saying something more dignifying, like:

“We don’t want to own a car, because there are plenty of on-demand car-sharing and rental options available”

Sounds much more in control and powerful, isn’t it?

A survey by global consultancy Duff & Phelps ‘The Millennials and Auto Trends Report’ polled 2150 millennials (23-38 years old) in the US, UK, France, Germany, and Italy.

➤ A large majority feel owning a car is necessary for independence (77%) and convenience (66%).

➤ While most (53%) still prefer petrol or diesel engines, more than one in three (39%) is considering a hybrid or full-electric for as their next vehicle.

Yes, owning a flashy car is no longer a status symbol it once was, but the majority of Millennials still want to own a car, because it gives them freedom.

The manager of Pueblo Tint, the leading window tinting company in Pueblo, CO confirmed this too.

“Having a car provides and will continue to provide the freedom that cannot be matched by any other transportation offering.

And it’s not very likely that people will give up that freedom for any other reason except being unable to afford it.”

The survey shows that just like in Europe, the US Millennials are also more likely to opt for public transport and shared mobility than older generations.

Because let’s be real:

Most of the US isn’t really built for any transportation solution other than private cars.

I don’t know any Americans outside of New York or other big cities that use public transport, do you?

Millennials still operate under the same constraints as prior generations, if we live in the suburbs, we still need to travel from A to B every single day.

Which in practice means that we still need personal cars.

Aversion towards cars is a circumstance, not a choice

This leads me to my final point: aversion towards cars is a circumstance, not necessarily a choice.

While it’s true that Millennials prioritise ‘experiences over possessions’ (i.e. car usage over car ownership), the studies fail to show whether these attitudes are driven by socioeconomic factors (i.e not having enough capital) or genuine preferences.

Not choosing to own a car can just be a way to cut costs.

If you have mountains of student debt and your work is unstable, then, believe me, your spending priorities will change accordingly.

5 Unknown Hacks to Save on Car Insurance
Tanya

Millennials And Cars – No Longer The Status Symbol!
Tanya