How Millennials Differ from the Other Generations? (Things You Didn’t Know) 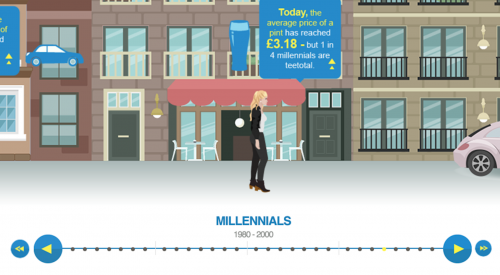 Millennials seem to be the topic of the moment in business media right now. Let’s look at the ways in which Millennials differ from the other generations.

The Generation Debt resource, developed by finance experts Wizzcash, highlights just how much the economic landscape has changed since the mid-1920s. The infographic shows the massive wealth gap between generations.

Below is the table of difference between generations:

“Loving what I do” outranked salary and a big bonus. Half of Millennials would “rather have no job than a job they hate”. This is reflected in Pew’s study, indicating a job that benefits society outranks a high salary.

60% of Millennials agree “if I can’t find a job I like, I will try and figure out a way to create my own job.”

#2 Millennials want to be evaluated on output, not input

Millennials believe that because of technology, they can work flexibly anytime, anyplace and that they should be evaluated on work product – not how, when, or where they got it done.

Hours spent at the office (input) does not equal results (output). Expect Millennials to influence the terms and conditions of the workplace.

The generational differences chart, developed by The West Midland Family Centre, shows Millennials have a work ethic that “no longer mandates” 10-hour days, in contrast to previous generations who had a “linear” working style and were used to a traditional working day.

#3 Millennials work hard, but only when it benefits them

Work-life balance is important, which means Millennials won’t work hard for the sole sake to impress their employer. They will sacrifice balance, but only occasionally, and if it’s aligned with their plan of self-development. 95% are “motivated to work harder when they know where their work is going.

#4 Work is an extension of Millennials’ identities

93% want a job where they can be themselves.

71% want their coworkers to be like a second family.

When Boomers depicted their work self to be formal and non-revealing of personal interests, then Millennials want to show who they are with the clothes they wear and the behaviours they exhibit, to the mindset they bring to work. There’s no life AND work anymore. Work and life are now one!

There are a couple of reasons why Millennials tend to be overly ambitious:

They are keen to impress their partner. They are at the beginning of their financial lives and are deeply aspirational.

Yet the reason, they end up spending way less on an engagement ring is because of the choice available to them. Technology has enabled us to easily find the best products, at the best price.

Unlike Millennials, Boomers grew up during the so-called De Beers myth.

De Beers, the chief producer of diamonds, the most common stone in an engagement ring, created a marketing campaign suggesting that diamonds effectively bought love, and you should be spending 3 months’ salary on your loved one’s ring.

Despite being an obvious ploy to encourage customers to spend more, De Beers effectively changed the perception of diamonds, and engagement rings, in the 20th century – the time when Boomers would have bought their rings.

#6 Millennials as heroes, not rebels

In generational theory, Millennials conform to the ‘hero’ archetype (versus say loner, magician or rebel). Heroes go on journeys to places never before visited, to discover new truths, to prove there is another way.

In many ways, this generation is uniquely equipped to see around corners and over the horizon – and that’s a very important trait in business.

In the workplace, Millennials put a far higher value on personal space, with 70% saying they need ‘me time’ at work, versus only 39% of Baby Boomers.

However, personal space doesn’t mean that they are loners. They thrive in a collaborative work environment and want to work with bright people and friends, but their need for occasional personal space should be respected.

#8 Millennial relationship with their bosses

The study points to Millennials’ thrive on fairness and performance-based appraisals, not tenure and seniority.

Millennials seek responsibility early on in their roles. They have high expectations of bosses and managers to assist and mentor them in the attainment of professional goals.

They respond poorly to those who act in an authoritarian manner and/or who expect to be respected due to higher rank alone.

Are you Millennial and recognise these traits in yourself? Have you noticed any differences in Millennials when compared to their predecessors? Let me know in the comments ??

How Millennial Managers De-Escalate Conflicts in the Workplace
Tanya

What Is a Settlement Agreement and Why Do You Need It?
Tanya