Will Millennials Turn Up To The Most Controversial Election In The US History? 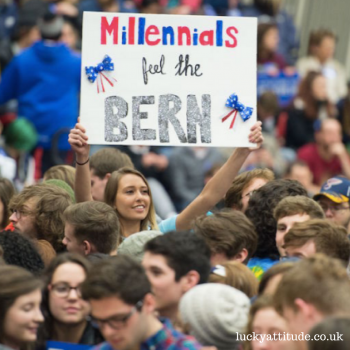 Millennials are the largest generation in the US, in terms of population.

Collectively they have a lot of power.

Millennials are also now equal to Baby Boomers as the largest group in the US electorate (69.2: 69.7 million ratio), a new Pew Research Center analysis has revealed.

But unless the young citizens turn out to vote on the 8th of November 2016, they won’t have the impact they could.

States where Millennials could decide the outcome

Multiple studies show that young voters propelled Obama to his two electoral victories, especially in 2012, when youth vote was key to Obama’s win in states like Florida, Pennsylvania, Ohio and Virginia, where he won Romney by at least 61% in each state.

Nevada is both racially and educationally diverse.

Currently, about 31% of the under-30 population is Latino.

Nevada also has a large non-college-educated population, which suggests the youth vote is far more multifaceted than in other states.

North Carolina was famously known for its high youth voter turnout in 2008, which swung the state in Barack Obama’s favour.

There are 1.2 million young people in Virginia, which is 21.3% of the state’s population.

A lot of young people tend to vote in Wisconsin. According to Census figures from the last three elections, turnout stayed around 60%.

The folks are overwhelmingly white, employed and living above the poverty rate.

Millennials are the largest age group in the Colorado state.

And youth voter turnout has been rising, as opposed to declining, which is the opposite of the national trend.

Ohio has a large number of colleges — 385 institutions of higher education and young people living with families.

Pennsylvania is unique. It’s introducing online registration, which may make it easier for first-time voters to sign up.

Like Florida, the state has more than 400 institutions of higher education.

And, in recent cycles, young voters in Pennsylvania have tilted far more to the left than older people.

Clinton and Trump are both unpopular with Millennials

This particular presidential cycle has produced two of the most widely disliked candidates in history.

Since Millennials’ favourite Democratic candidate, Vermont Senator Bernie Sanders, is out of the race, the enthusiasm for the future is low among the young people and hence the expectations for the upcoming election turnout is uncertain.

Out of the two, Millennials prefer Democrat Clinton over Republican Trump, according to a poll released Monday by Harvard University’s Institute of Politics.

Trump has the highest net negative, with 74% not liking the candidate and 17% approving of him.

Clinton has become the least popular Democratic nominee in modern history. People view her as inconsistent, “corrupt”, inhuman and robotic.

Trump, on the other hand, has been talking about deporting all undocumented immigrants, bombing Syria and introducing Muslim-ban to the US, whereby no Muslims are allowed to enter the United States —as immigrants or visitors.

How does the US presidential election affect the economy?

The US, largest economy in the world, generate world-wide attention in the major economies during the elections.

Many economists study relationships between elections and financial markets and history shows that presidential politics have a very small impact on your portfolio.

There is no evidence to suggest that who the President is, whether Republican or Democrat, should cause you to want to deviate from your investment strategy. Stocks generally rise over time no matter who’s in charge.

Headlines suggest that Trump’s win could see short-term fluctuations in US dollar markets due to the uncertainty of markets about the effects of his policies on the US economy.

If Clinton wins, expect something similar to the markets under President Obama — more of the slow grind of policy-making.

In the short to medium term, whether Clinton or Trump win there is unlikely to be any great impact on the markets either domestically or abroad.

For example, large financial institutions and individual traders using online trading platforms, will continue to trade regardless and under normal trading conditions.

In the long term, things may change, but the rate of change won’t be dramatic and markets will be able to adopt as required.