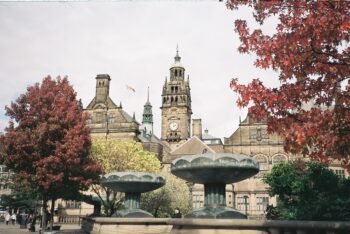 The northern city of Sheffield in South Yorkshire is most commonly known as one of the UK’s most prolific industrial cities during the Industrial Revolution and was even nicknamed “The Steel City” thanks to its heritage as a major steel manufacturer.

However, despite a period of economic decline in the latter half of the 20th century thanks to the deindustrialisation of the manufacturing industry across the UK, Sheffield has certainly bounced back over the last 30 years in a completely different direction.

Awarded the moniker of one of the safest and friendliest UK cities on more than one occasion, today the industrial centre of old has become ‘The Outdoor City’, famed not only for its excellent amenities and leisure facilities but for its greenery, the stunning Peak District backdrop and its popularity with cyclists, hikers, runners and climbers.

Homebuyers are drawn to the outdoor space that the city provides (particularly in a post-Covid world) in the shape of Sheffield Botanic Gardens, the Sheffield Winter Gardens, Endcliffe Park, or the Parkwood Springs mountain bike trail to name but a few. Indeed, you can take your pick from over 250 parks and outdoor spaces in the city!

Sheffield’s central spot in the middle of the country means that it is also well connected when it comes to travel. For fans of public transport, Sheffield train station and tram services are second to none and there is also a great selection of local airports such as Doncaster Sheffield Robin Hood, Manchester, Leeds/Bradford, and East Midlands for journeys further afield with the M1 motorway providing an easy connection with the rest of the UK.

When it comes to amenities, everyone is catered for with the impressive range of shops and eateries at Meadow Hall and Crystal Peaks or the more boutique Ecclesall Road and there are plenty of activities for all ages and interests such as The Climbing Works indoor climbing centre, the Ice Sheffield ice rink, an impressive range of museums and the Lyceum and Crucible theatres. The city also plays host to an impressive range of events such as the month-long Festival of the Outdoors and three-day music festival Tramlines, not to mention some nail-biting international football, ice hockey, and snooker matches!

Parents with school-age children will also be pleased with the range of education settings on offer, with an impressive 141 primary schools and 28 secondary schools to choose from within the city.

Sheffield residents also benefit from extremely affordable property options and costs of living when compared to fellow Northern powerhouses Manchester and Leeds, with the average property price overall in the city in the last 12 months coming in at a very competitive £227,660. This is significantly more affordable than the national average of £266,000 and on par with the Yorkshire and Humber region overall.

However, for those homebuyers where budget is less of a constraint, Sheffield also offers a little bit of luxury and the chance to have it all.

Below are the top 5 most budget-busting areas of the city and what they have to offer.

Pricey Whirlow only 4 miles southwest from the city centre comes top of our list with a hefty average property price tag of £687,161 over the last 12 months, although many local properties regularly exceed the £1,000,000 mark. Only a few minutes from the impressive retail mecca Ecclesall Road, Whirlow itself has a peaceful village vibe in a stunning rural setting, much of which is a conservation area. The area is also home to the impressive 39-acre park and woodlands of Whirlowbrook Hall and Park, Whirlow Hall Farm – a 138-acre charitable trust farm and farm shop – and the stunning Whinfell Quarry Garden.

The charming, sought-after village of Dore is around 6 miles south-west of Sheffield city centre and had an average house price of £516,979 over the last 12 months. This is thanks to its picturesque feel, great primary and secondary school options, plenty of local amenities and proximity the Peak District amongst other selling points. The train into the centre of Sheffield also only takes 10 minutes, giving residents the best of both worlds when it comes to a painless commute and a more relaxed homelife in a picturesque setting.

Less than 3 miles drive from the city centre and with Endcliffe Park, Bingham Park and Whiteley Woods on the doorstep, Greystones is a popular spot with Sheffield house hunters thanks to a great selection of local schools (primary in particular) shops and amenities. The Peak District is also on the doorstep and with an average house price of £486,619, Greystones is a more affordable option than popular hotspots Whirlow and Dore with a bit more going on.

Leafy, suburban Fulwood is a big hit with families, the older generation, and young professionals alike thanks to a great selection of primary schools, far-reaching views over the city, and some great quality pubs, clubs and live music venues. Being only 3 miles south-west of the city centre means commuting for work or leisure is still simple too.

Further from the city than the other options on our list, scenic Lodge Moor is still less than 5 miles from the city centre via the A57 and the closest to the stunning Peak Districts which is quite literally on the doorstep, as are the picturesque Rivelin and Redmires Reservoirs and the Fox Hagg nature reserve. With a more affordable average price tag of £422,216, Lodge Moor is an ideal spot for nature and outdoor enthusiasts.