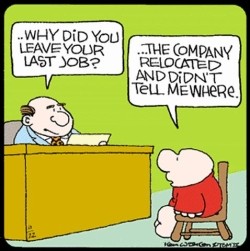 When I first moved to London I went through a LOT of tedious job interviews. I always felt like I had to pretend to be somebody I’m not and say things that recruiters wanted to hear, and despite the fact we both knew it was a big fat lie, we still did it … played the game … but what is the point?

A few months ago, I interviewed with PayPal and one of the hiring managers told me before the interview to use the 3 certain keywords that according to him would get me the job.

I was stunned! How did he know I was a good fit before even talking to me and whether I would like the team and the sound of the job? Also, if talent is measured by business jargon (industry keywords), then I’m not playing. I believe that making the simple complicated is commonplace, but making the complicated simple, is talent.

If I were to play that part too well, I might have got hired into a job that would suck my life force away. Thank God that wasn’t the case!

1) Tell me about yourself?
2) What are your strengths?
3) Blah blah blah, what are your weaknesses?
4) WHY DO YOU HAVE GAPS ON YOUR RESUME YOU LOSER?
5) Where do you see yourself in 5 years?

Where do you see yourself in 5 years? Really? Are people still asking this ancient interview question in 2014? The truth is that no one can make a five-year-horizon career plan in 2014 (maybe the Pope?).

With questions like this I feel like I run in circles – “Why are you the best candidate for this position” has the same answer as “ Tell me about yourself” and “ What are your strengths”. So what is the whole point of this hiring process?

The funniest thing happened in my 3rd interview in London, when I was asked:“If you were an animal, what animal would you be”. Coming from Estonia, this was a new to me. I couldn’t help, but wanted to burst into laughter, but I couldn’t, as we all know laughing at an interview is a NO-NO. Plus the HR people were as dry as anything when they asked me this, which made it even funnier.

Some ideas for the change:

– Be human, and let me be human. I don’t like staged conversations (after all, we might end up seeing each other every day, it’d be nice to get along).

– Eliminate all of those exam questions above and surprise/challenge me with something more real.

– Get rid of all that question-answer thing altogether and let’s do a pilot project instead. You can pay me a contractor fee for the work, and I make sure it’s the type of work that’s easily definable, has clear deliverables, and lasts a few weeks.

In fact, this is how I got my current role. The project I did went very well, and CEO made me a full-time offer.

My best interviews are always those where the interviewer and I have a friendly discussion rather than them asking me a list of questions. It allows me to be myself and give them all the answers they need at the same time.

Also, by letting other part speak you’ll learn much more about your candidates than you ever would from their answers!

The Sexiness Of Being Busy: NOT
Tanya

What Did I Learn From My First Gen Y Hire? Don’t Be Like Me!
Tanya

Gen Y Work Culture: Don’t Show Up On Time, But Check Emails At 2am
Tanya