Being Lazy Intelligent. The Benefits. 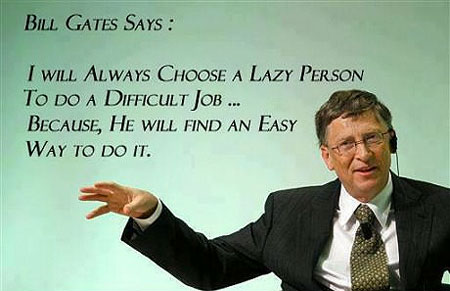 Bill’s not the only guy, who believes that laziness doesn’t necessarily have to be a bad thing. A German Army Chief Kurt von Hammerstein-Equord divided his officers into four groups based on their behavioral habits. There are intelligent, active, stupid, and lazy officers. Usually two characteristics are combined:

These people make great strategic thinkers and leaders. They do things in a smart way in order to expend the least effort. They don’t rush into things, taking that little bit of extra time to think and find the shortest, best path.

They question, contradict, and show dissent against inefficient methods or unnecessary tasks.

Their intelligence can be slightly diluted or tempered by their activity. Where they don’t have a perfect solution, they might act anyway, rather than sitting on their laurels, so useful people but not great leaders. They can often be acting too early and too fast.

Very active people need to learn to prioritize their efforts to produce good outputs as they can get carried away with the “doing” and forget “why” they are doing it.

These people are easy to manage, they generally don’t act on their own initiative, and given tasks that are not beyond them, they will perform in a predictable, consistent manner. Usually, they won’t cause any harm to teams.

These are the dangerous ones. Their default behaviour is to act, and in the absence of skill or thought they can cause all types of trouble.

Are you “Lazy Intelligent”?

This former kind of “lazy” can also be called “efficient” – if we were to be diplomatic.

When active intelligent people are doers, who are motivated by getting things done, without questioning the systems and processes too much, lazy intelligent people, on the other hand, often don’t mind standing out by asking questions and trying out new approaches.

As out of character as it may sound, “lazy Intelligent” people often get work done faster than the active intelligent types. Here’s why …

They ask for help

While most people are focused on doing perfect work on their own through research, lazy intelligent people network with people who have first-hand information, which means that they get the best information quicker.

Most of us prefer to do things by ourselves and not disturb others. That’s a great work ethic, but sometimes asking for help gets us further than just doing it alone.

People love to help. My readers often email me at Lucky Attitude blog for advice or help and I make an effort to answer their questions, because I want to see them do well, too. As a consequence, I have developed a network of people who I can rely on for help and advice in return.

In my article “Why Rewards Actually Demotivate You? (Scientific Proof!)” I wrote about three key principles that motivate intelligent people. These are: autonomy (nobody likes to be told what to do), mastery (success comes through trial and failure) and purpose (doing things just for the sake of doing things is bad practice).

I believe that pure, undiluted autonomy can produce amazing things for a business if you provide the right environment for it to happen and just get out of the way.

Multi-tasking is for active people, lazy ones focus on essentials, which is usually required to move forward, rather than being distracted by unnecessary extras.

(I don’t actually believe that multi-tasking and success go together, but that’s a topic for another time.)

They hire people who are smarter than they are, because they are not interested in micro-managing ( i.e.additional work).

They trust people to do their jobs and will not try to do everybody else’s work. Hence, they will always have time to think.

If you are running a business, hire someone to take care of lower impact items that need to get done (such as administrative activities).

If something is not your area of expertise or it can be better done by someone else, then outsource it. The most common outsourced services are manufacturing, data entry, IT support, research, legal, and creative services

You only have 24 hours a day; your limited time should be spent only in places where you can add the most value.

If you are running a business, examine if there are any aspects of your work (such as accounting, designing, programming) that can be outsourced to others.

There’s no need for you to learn and get hands-on on every single thing, especially if it’s not the core of your work.

They think in short-cuts

Rather than trying to power through the most obvious path, they sit back for a bit to think if there is a better path to be taken to achieve the results.

If the same result can be achieved with less energy and time, why do it the other way?

There are better ways of working. Don’t restrict yourself to a certain set rule of doing things just for the sake of status quo.

Study others and learn from them. Read how MT Online got rid of email, meetings, and managers — and thrived.

Review your situation regularly and be flexible to usher in changes that can help you get more results.