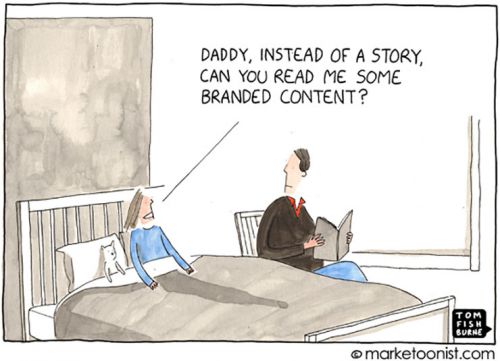 For some reason, there is a conventional “wisdom” held by the industry that branded content (sometimes also referred to as sponsored content) won’t get shared and loved, because people don’t trust advertising.

Last year at the Next Generation of Global Consumers event I asked millennial panel whether they would share branded content with their friends.

They said something I already suspected.

They said that if the content was relevant to them, it didn’t matter whether the logo was attached to it or not.

One panelist said that if, for example, McDonald’s made a funny and totally unexpected ad, they would be even more inclined to share it with their friends with something like: “Oh my god, look what McDonald’s did now!?”.

Another panelist said that when brands post messages that find meaning and help society in one or another way, they are not viewed as advertisers at all, but as a promoters of a good cause.

In this ad below, Always turns the phrase doing things “like a girl” from insult to a confidence movement.

But is there any evidence to support this view on a larger scale?

A recent report “What normative data says about effectiveness“ by AOL looked at sponsored content within Huffington Post and some of its other digital publishing properties.

After analyzing the data, author Christian Kugel came to the conclusion:

“Not only do heavier brand integration perform better to drive higher engagement and consideration, the content itself is also rated more favourable.”

In 2013 Nelson-Field study found that there was no impact on how much sharing across the social web a video achieved relating to the level of branding used.

Not only that, the evidence suggested that apparent branding has no impact on a video’s ability to spark an emotional response.

So, here you have it: it’s the big powerful ideas that matter, not branding.

Because in reality, people don’t think about branding that much at all.

What are your thoughts?