Why The Gig Economy ISN’T A Sharing Economy 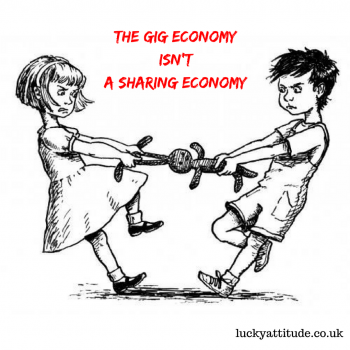 The ‘gig economy’, often called the ‘sharing economy’ became popular after the financial crisis in 2008, when new business structures emerged due to the Great Recession.

Airbnb and Uber were born out of financial desperation (not desire or opportunism) during 2008/2009.

During the recession, many people from all walks of life needed to rent out their spare room to pay for their rent.

Those, who didn’t have a spare room to rent, sacrificed their time driving people around the town.

Today, 10 years later, many people still participate in the ‘sharing economy’ out of necessity, not desire.

Over the years, we’ve just learned to market it better:

we are now sold this virtuous idea, where urban hipsters turn their assets into cash, while saving the planet and making new friends along the way.

Who are you fooling?

How many people do you know, who sell and buy on platforms like TaskRabbit, Fiverr, UpWork, Airbnb etc out of altruistic desire to help each others and make the world a better place?

Sellers are motivated by an unforgiving and poor economy, using their assets and labour to get by, while buyers are primarily concerned about the low costs rather than social objectives.

The exchange is purely economic and isn’t based on trust. People trust the platform, not each other, providing income for the firms.

Airbnb and Uber are not part of the ‘sharing economy’

Friends and neighbours have always assisted each other, lending each other equipment and sharing knowledge or providing transport.

And this exchange has always been ‘I help you and you help me’, which unlike monetary transaction, actually strengthens social cohesion.

Adding a monetary element only exploits the circumstances of those who are financially worse off. 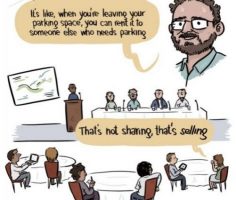 ‘Hey! You are a designer, pick up extra cash banging out logos with 99designs!’

… and the wages for trained taxi drivers and vocational designers keep falling with each iteration/bid on these platforms.

Hidden behind Fiverr and Odesk, these workers are essentially faceless commodity, with no differentiation between one another.

Commodities have no intrinsic value and because of it, clients want to pay as little as possible.

If not properly regulated, the gig economy can turn to capitalism at its worst – where the rich openly use the poor for their maximum benefit and face no consequences.

Why your Uber ride is so cheap

Have you wondered why your Uber ride is cheaper than a regular taxi?

It’s because Uber doesn’t pay your driver for holidays, sick days or parental leave. They can’t even guarantee the minimum wage.

That is the only way they can keep the price so low for the end-customers.

So, essentially you are saving few bucks at the expense of someone’s wellbeing and hence contributing to their exploitation.

I’m not against gig economy as such.

I think it’s wonderfully freeing to be able to work independently by just switching on the app whenever you want and take on a job.

The only problem I have with it, is that it needs to be regulated, so that it becomes fair for everyone.

Uber has long argued its business to be ‘information society service’, that connects drivers and customers through an app, rather than a traditional taxi operation, allowing it to avoid labour laws, covering minimum wages, working conditions and benefits.

Technically, the worker is not ’employed’ but an ‘independent contractor’, who is not subject to these regulations.

Luckily, in December 2017, the EU’s highest court has ruled that Uber is a transport company, which means it is now regulated in the same way as other taxi operators in Europe’s 28 member states.

It means that Uber drivers are entitled to all employee benefits like minimum wage, protection against unfair dismissal, paid holiday & sickness pay.

Currently UK operations are not affected by the EU judgement, but there’s plenty we can do individually to ease our drivers’ burden a little. We could always offer a tip by way of acknowledging that the service is actually worth more. Considering their current circumstances, it’s just the right thing to do.

Regulations benefit everyone, not just workers

All markets are socially embedded.

Do you want to be driven by non-professional, overworked and tired taxi driver, who doesn’t know the area?

Regulations are there to protect people from harmful things that they cannot prevent on their own.

Without regulations, markets can often be dominated by one or a small number of firms, who can force customers to pay artificially high prices.

Anti-monopoly regulations can insure greater competition and fairer prices for everyone.

A competitive environment creates an atmosphere of survival of the fittest (i.e richest), where many businesses disregard the wellbeing of the public to increase the bottom line.

Ultimately, if wealth is not distributed equally – a small percentage of society has the wealth while the majority lives in poverty.