How Millennials Have Transformed The Aspirational Lifestyle? 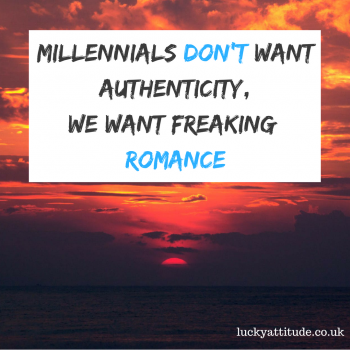 Marketing, in its most traditional form, is about selling an aspirational lifestyle.

While examples of high-fashion glitziness still has its place in advertising, a new kind of aspirational lifestyle has emerged, driven forwards by the changing tastes of Millennials and Internet marketing.

How Millennials and the Internet have changed marketing?

This began with the rise of the hipster fashion movement in 2010.

Recognised as a valuable market by brands, hipsters were viewed as an affluent set of urban dwellers, usually working in tech jobs or the creative industries, who both rejected traditional consumerism and yet defined themselves by their purchases.

They distinguished themselves by deliberately seeking out the most well crafted and creative goods, favouring the authenticity and ethical nature of buying from small businesses, artisans and craftsman – or at the very least buying things that successfully portrayed the illusion that they were produced in this way.

The most striking example of this was the continuing rise of craft beers, and the transformation in the way that beer was marketed, with a huge emphasis on heritage and tradition – which was recently mocked by Budweiser.

Major brands began re-releasing their classic ranges, mass-produced products, that were packaged in a way that suggested they were created by expert human hands rather than machinery, and the content of adverts began to change.

Beards and fisherman jumpers became ubiquitous, the focus on “craft” was laser-like and the aspirational lifestyle being created was one of freedom and creativity, complemented by a few well-chosen and interesting items.

Stripped back “authenticity” = unpretentious minimalism is on the rise

Authenticity may have been fallen out of fashion recently in favour of a kind of “stripped back” authenticity – but the point is the same. Brands are trying to create the image of something achingly real, an accessory to a truly well-lived, interesting and unique kind of existence.

The hipster may have been declared dead (having been derided for their perceived pompousness and superficiality) but the values they championed have definitely lingered, whether they were sincerely held or not.

The new imagery and styles developing now are simply an evolution of the same ideals.

Retro-nostalgia is a thing among Millennials

From, choker necklaces to Pokemon and vinyl, the youth are suddenly yearning for simpler times before the Internet made everything complicated.

What Millennials generally refer to as retro-nostalgia, is in-fact fauxstalgia(the admiration of time in the past, even though they haven’t lived in it).

Why do Millennials yearn for times they haven’t lived in?

Because back in the day, people actually spend time together and felt a sense of belonging – a feeling that post-Internet generations is missing.

Millennials are still aspired by perfection, even if they call it “authentic“

With brand partnerships between bloggers and Instagram stars, advertisers are picking those who appear to be leading picture-perfect and fascinating lives (this sort of person is going to garner the biggest Internet following), looking forever perfect even as they backpack around India.

From this, ideas have developed around the ultimate aspirational lifestyle being one where you aren’t weighed down by material things, and are instead bold enough to be different.

Aspirational imagery is full of people living adventurously and creatively at the edge of experience, where every day is fully appreciated and authentically lived.

People want to be untethered, and to feel as if they are buying into a life which is – counterintuitively – actually free from consumerism.

Advertising in this way is much more human, showing an authentic life where consumers can relate and aspire to the (heavily curated) experiences of a real person.

With Instagram stars, people have a more comprehensive insight into the desirable lifestyle of others. They also feel like they can get to know these people, an intimacy which makes the aspirations they present seem tantalisingly attainable.

Aspirational lifestyle is accessed, not bought

This trend is growing particularly as our purchases – and even large parts of our lives – become ever more ethereal.

Our alternative selves are living out a separate existence on social media and an increasing amount of our consumption (like e-books, music and games) involves the exchange of money for something that’s immaterial.

With this, people are more directly buying immaterial pieces of a lifestyle rather than the physical items that can allude to it.

This is evident in the rise of super car hire and emergence of exclusive property investment clubs where luxury properties are shared rather than owned, displaying that even the most high-end purchases are becoming about gaining access to slices of a uninhibited, exciting and interesting lifestyle, rather than actual acquisition.

Millennials are against consumerism, yet are still deeply commercial

Consumers are fetishizing items they consider to be traditionally crafted or particularly “human” (as can be seen with the popularity of websites like Etsy), concurrently being less interested in the material in order to be more authentic while becoming obsessed with the physical things that indicate that they are living in this genuine manner.

The focus has shifted to making fewer but much more thoughtful purchases that actually enrich your life. This contains the discrepancy of the original hipster movement in that it’s moving away from the ideas of consumerism and a hyper-glamourous lifestyle, yet is still deeply commercial.

What’s considered aspirational will always evolve as people’s values and desires change, but even as the finer points change, it seems the imagery associated with handcrafted self-sufficiency, punctuated by adventure and freedom, will be here to stay.