Everything You Know About Work Is A Scam 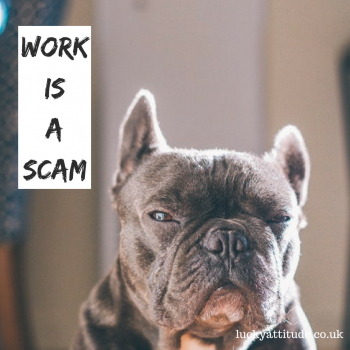 Everything you know about work is wrong.

The new world of work is no longer just about what you do, is who you are.

It’s where you unlock your genius.

But why have we been doing it wrong the whole time?

Without further ado, let’s start from the beginning – the school.

School is a scam

We have all been brainwashed by educational system, that wants us to be good at following instructions and fit in.

School prepares compliant factory workers, who will be exploited.

Schools prepares us to be cogs in capitalistic machine.

The problem is, the world doesn’t need compliant workers any more. But schools still keep producing them.

Answering questions like “When was the War of 1812?” is a useless skill in an always-on Wikipedia world.

It’s far more useful to the able to answer questions that Google can’t help us with, such as “What should I do next?”

The world is changing so fast that human intelligence can’t keep up. In the last 5 years it has changed more than in the last 50.

As a result, we need artistic leaders, who can see the world as it is and prepare us for the future.

How was it possible to brainwash billions of people to bury their genius, to give up their dreams and to buy into the idea of being merely an employee in a factory following instructions for apparent stability.

Schools have figured it out that fear is a great shortcut to teach compliance.

Studies show that things learned in frightening circumstances are sticky:

We remember what we learn on a battlefield or when we burn our finger.

Classrooms become fear-based test-based battlefields, when they could easily be organized to encourage the nonconformist thought we so badly need.

So, is it any surprise that people have learned to fit in, do the standardised tests, keep heads down, obey instructions?

Research shows that mediocre obedience doesn’t show up in humans until after few years of schooling, it is not a genetic fact.

School is teaching us the wrong stuff. School expects that our students will graduate to be trained trigonometricians. They’ll be hired by people to compute the length of the hypotenuse of a certain right triangle.

We learn at school how to be a good worker.

You learned that if you pay attention, follow instructions, show up on time and try hard, companies will take care of you. And it has been pretty seductive bargain.

So seductive, that for a century we embraced it.

Factory work offered average people with small dreams a chance to make a significant change in their standard of living.

But the system is falling apart and a lot of people are suffering, because the things they thought would work, don’t.

There is no job for life any more, because you are easily replaceable.

There’s no need for rule-followers because outsourcing, automation and the new marketing punishes everyone who is merely good, merely obedient.

This causes suffering – people are over-worked, under-paid, laid-offed and stressed-out.

For hundreds of years the population has been seduced, scammed and brainwashed into fitting in, following instructions and exchanging a days work for a days pay.

Factory model looked for a way to turn low-wage earners into high value producers. The goal was to hire as many obedient competent workers as cheaply as possible.

Not only are you easily replaceable by fitting in, consumers are not loyal to cheap commodities.

They crave the unique, the remarkable, the human.

The cheap strategy doesn’t scale very well any more, so the only way to succeed is by amplifying the network and giving workers a platform, not forcing them to pretend to be machines.

You traded your years of your life to be a part of a giant con, in which you are most definitely not a winner.

If you’ve been playing that game, its no wonder you’re frustrated.

That game is over. You have to rethink how you do your job.

The myth of the white-collar job

Most white-collar workers wear white collars, but they are still working in the factory.

They push a pencil or process an application instead of operating a drill press. But that’s factory work.

White collar job was supposed to save the middle class, because it was machine proof. A machine could replace a guy hauling widgets up of stairs, but machine could never replace someone answering the phone or running the fax machine.

Of course machines have replaced these workers.

Competitive pressure and greed have encouraged most organizations to turn their workers into machines.

How to be irreplaceable at work?

Today is a turning point. Once in a lifetime moment when you get to make a choice.

You have a choice – a choice to buy into the fear and system or to create your own value.

We need marketers who can lead, sales people to be able to make human connections, passionate change makers willing to be shunned if it’s necessary for them to make a point.

Every organization needs people like this. Some organizations have realized it, but haven’t articulated it. Yet!

We need artists. An artist is a person with genius for finding a new answer, a new connection or a new way of getting things done.

You’ve been brainwashed to think you are NOT an artist

What makes someone an artist?

I don’t think it has something to do with a paintbrush.

Charlie Chaplin was an artist, no doubt.

So is Jonathan Ive, who designed iPod.

Tom Peters, corporate gadfly and writer, is an artist, even though his readers are business people.

There are artists, who work with numbers, business models and customer conversations.

Art is about intent and communication, not substances.

Art is a personal gift, a human connection, that changes recipient. Art is a gift you give, because it’s intrinsically rewarding.

There is an art of running a meeting, counselling a student, conducting an interview or calming an angry customer.

And it is entirely possible that YOU are an artist, you just have never though of yourself like that.

The artist is someone who uses bravery, insight, creativity and boldness to challenge status quo. Art is always original.

A cook is not an artist, because she follows the recipe, a chief is an artist – because she invents new recipes. She gets out of her comfort zone. She challenges status quo. She is original.

There are people in all sorts of jobs that are doing art – waiters, musicians, doctors, nurses and lawyers.

There are no great jobs where someone else tells you what to do any more. You have to bring your artist, that you’ve been hiding all these years, to work.

What a new boss really wants is an artist, someone who can see the reality of today and describe a better tomorrow.

Our economy now rewards artists far more than any other economy in history ever has.

You don’t have to pretend that you’re mediocre any more, you are free to be yourself.

Working-class owns the means of production

It used to be that middle class had the capital and power. Now the proletariat owns the means of production.

Now the workers are self-organized online.

Now the access to capital and ability to find one another is no longer a problem.

Change starts with independent bloggers, musicians, writers and others who don’t need anyone’s support or permission to do their thing.

Perez Hilton becomes rich and famous writing on his blog.

Abbey Ryan makes almost a hundred thousand of dollars a year painting a tiny oil painting each day and selling it on eBay.

These individuals have all the technical, manufacturing and distribution support they need, so they are both capitalists and workers.

To build a pretty good website is significantly cheaper, faster and easier than building a pretty good store-front was twenty years ago. Same goes with writing a pretty good email, one that compares with something from a giant corporation, or shipping a package across the country.

In the last few years, though, it’s becoming clear that people who reject the worst of the current system are actually more likely to succeed.

Leading without a map

Leading is a skill. You are not born with it, you learn how.

And schools can teach leadership as easily as they figured out how to teach compliance.

Schools can teach us to be open to connection, to understand the elements that build a tribe.

Because leadership is now worth more than compliance.

Imagine an organization with an employee who can accurately see the truth, understand the situation, and understand the potential outcomes of various situations. And now imagine that this person is also able to make something happen.

Remarkable workers can see the truth and acknowledge it. They notice unhappy customer, shoddy product or decaying industry and they adapt without resistance.

If you’re only working for the person you report to, you may be sacrificing your future.

Pleasing a boss may cause you to alienate your customers, hide your best work.

If your agenda is set by someone else and it doesn’t lead you where you want to go, why is it your agenda?

The biggest shift in this new economy of workers is self-determination.

Access to capital and appropriate connections aren’t nearly as essential as they were.

Remarkable workers are made not born.

Transferring your passion to your job is easier than ever.

Now society rewards you for standing out, what are you doing to do?

Every day more than a few people change everything. You can do it. You can embrace new path and take it.

I didn’t set out to to get you to quit your job or persuade you to become an entrepreneur or “change the world”. I just want to tell you to be the artist you already are. To make a difference. To stand for something. To get the respect and security you deserve.